I walked across the bustling road, feeling bored and felt like I just needed to use all the energy pent up inside me. I could spot lots of different stalls, some lit up brightly, while some handed out brochures, people kept calling out to me, handing me items and examples to advertise their stalls. I tried looking for stalls that looked like they could use some help, but when I did, they surprisingly handled their problems before I even approached!

I was so busy with my thoughts, that I almost didn’t hear Poe calling me out from behind. “World-hopper! World-hopper!!,” she shouted as she squeezed her way to me. I asked what she needed, and she dragged me out of the busy streets, ran on a bridge with lotus carvings, zoomed past her parents, and jumped into a very slow boat, which led us to a quiet and peaceful stall which had nobody occupying it.

It was an odd sight, because when I look over from my shoulder, I could see the festival with people walking and rushing here and there, stalls filled with merchants making deals. I thought that maybe Poe had found a new place to hide away from her parents so she could enjoy the festival herself, but it seemed that, that wasn’t the case. She beamed at me and clasped my hands, “World-hopper, sorry for dragging you out here, but I really need help! Lian told me that I could start a stall of my own and keep the stall flooding with people, but I just couldn’t find what to sell and what could possibly attract customers!! Could you possibly help me? ,” I thought, well, I guess I could do some energy wasting on this, so I agreed.

First, I brainstormed some common ideas, such as, selling some lanterns, cloth or masks, like the usual we see around, but Poe rejected the ideas I came up with, she said she wanted it to be special, intriguing and different from what the other stalls sold. I sat down on a short stone pillar while Poe dunked her head in the water for a moment, I thought of other ideas, Poe had also suggested some ideas, but it just didn’t fit right with the festival’s vibes. So I first asked, what specific age she was looking for to help her items sell, what items or supplies we actually have, and who were the staff to help this stall sell out. She paused for a moment and smiled, “World-hopper! You’re a genius!! I didn’t think of this before, but when you asked those questions, I realized that I didn’t have stock on only one type of specific items, we could sell a variety of items! That way, we could gain attraction from all ages, but the problem is the staff… I couldn’t go out there advertising if I left my stall unattended, and if I couldn’t advertise, people won’t get interested and no one will know this stall even existed!”

She seemed worried so I offered my help to watch over the stall while she advertises, I mean, just thinking won’t drain my energy, right? So I set off underwater with my breathing apparatus and Poe to take the items she’d like to sell and oh boy, there were like, two or three huge turnip sacks that Buli uses filled with those miscellaneous items to sell! We had to go back and forth two times just because they were too heavy to carry all at once.

We named the shop “The Knick Knack Shop”, once we set up the stall, hung up the sign, printed the flyers, not forgetting to supply Poe with a jug of water and a simple reminder so she doesn’t wander off, we lit up the stall and finally opened it. Poe ran off into the midst of the festivities and soon later, a row of lines appeared! Each customer asked about different things and ware interested in variety of items, I spotted some of the children from the underwater day care and gave them a 10% discount per every six items bought. They each bought ten items and said they would be back. After quite some time, it was still busy and Poe came back with a huge bird behind her, “World hopper, meet mister Peli, the Pelican! He’s my newly scouted staff, you now no need to worry about watching over the stall, you must be tired from all that work I dumped on you! .” Mr. Peli looked intimidating because of his size, but has a very friendly personality. I guess his size might just be what would make our stall stand out. I left the stall and went home feeling tired, but happy on the usual rickshaw service after being gifted loads of presents as a thank you gift from Poe. 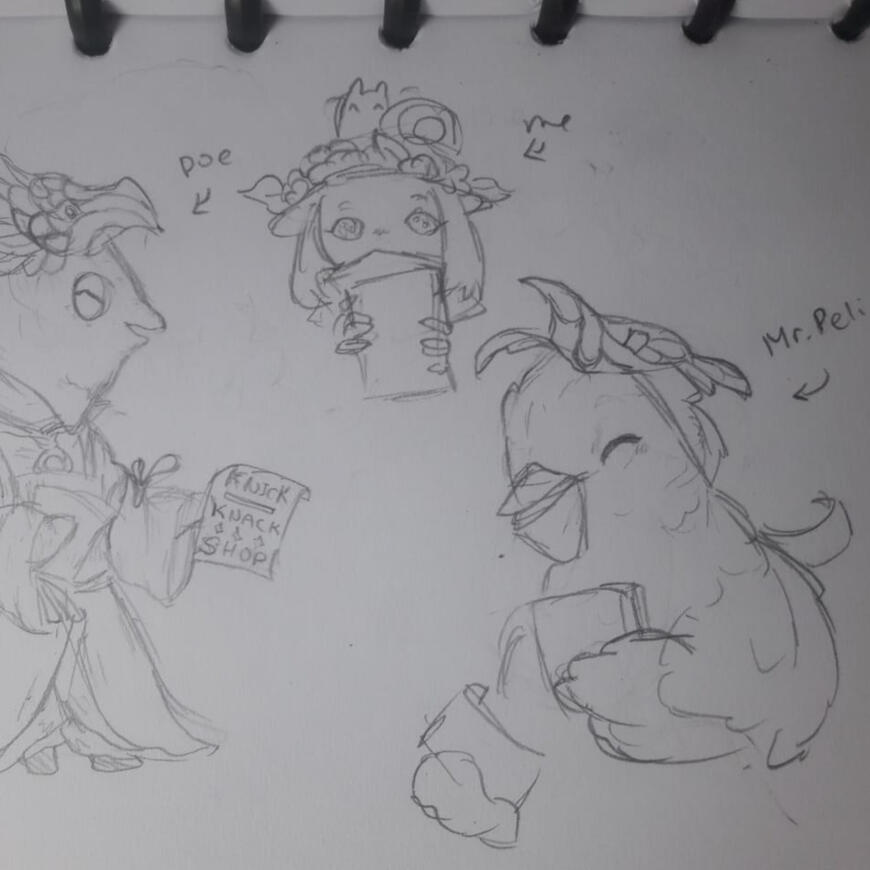